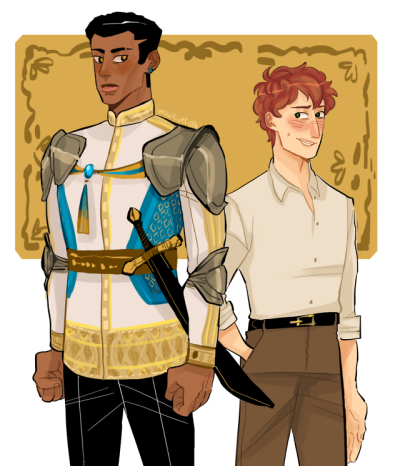 The Two Princes is a podcast fairytale series featuring two gay princes, it was written by Kevin Christopher Snipes and directed by Mimi O’Donnell, who is Gimlet’s executive producer for scripted fiction.

The story begins with a prince setting out on a journey to find a treasure and save a damsel in distress (princess) but it blossoms into an amazing love story between two princes.

When Prince Rupert sets out to break the mysterious curse that’s destroying his kingdom, he’s ready to face whatever dastardly villain or vile monster stands in his way. What he isn’t prepared for is the bewildering new emotions he feels when he meets the handsome Amir, a rival prince on a quest to save his own realm. Forced to team up, the two princes soon discover that the only thing more difficult than saving their kingdoms is following their hearts.

This is a very happy moment for the LGBT community to see Gay/Queer fairy tales popping up in different forms of media. Also, for several age groups and getting support from different media channels and actors.

ALSO READ: Why People Fear LGBTs? Is the Fear Genuine?

The Two princes aren’t prepared for the emotions they feel for each other, which is a completely relatable feeling for kids ~ especially those in the LGBTQ+ community.

Noah Galvin playing the role of Prince Rupert, during an interview shared his opinion on the fairytale.

A love story, you know, would normally be a prince and a princess or a king and a queen and we’re subverting it and making it about two teenage princes. I think it’s beautiful and it’s beautifully representative of you know, not only Pride month, but also where we are in society. I think it’s something that people need and I think every little bit of representation matters” he stated. “Hell yeah, Let’s gay it up”.

The future shows promise of improving Gay characters in the Entertainment Industry & more exposure for members of the LGBT community. This fairytale story has spawned a lot of different books/novels such as “The bravest Knight”, “The Prince & the Dressmaker” and so much more.

What are common misconceptions about the LGBT community .