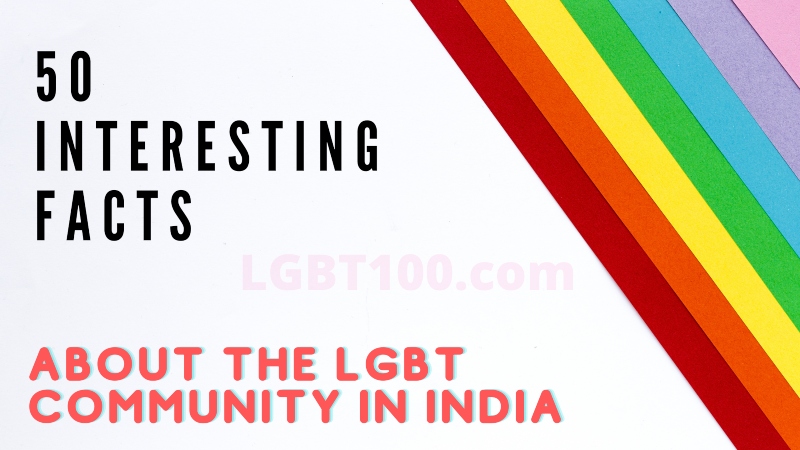 Homosexuality in India was also recognized as “Tritiya Prakriti” during the Vedic age.

The first Mughal emperor of India, Babur was infatuated by a teenage boy and was not straight.

The first book on homosexuality in India ‘The world of Homosexuals’ was written by writer and math wizard Shakuntla Devi.

Indian Journalist Ashok Row Kavi penned an article about himself for Savvy Magazine, which became the first ‘coming out’ story from India in 1986.

In 1987, two Indian Policewomen Leela and Urmila from Madhyapradesh got married to each other, however, both were discharged from their duties post-ceremony.

Bollywood movies, Aligarh, and Kapoor & Sons inspired a lot of people for their positive depiction of gay identities.

The first formal parent gathering to offer support to the parents of India’s LGBTQ members was held in Mumbai.

Tuition fees were scrapped for transgenders at The Manonmaniam Sundaranar University (MSU) in Tamil Nadu.

Lucknow hosted its first Gay Pride march (the first city in UP to do so), and people loved it.

Elder LGBTQ members in Mumbai are being offered a safe space to meet for a ‘chai and a chat’ to tackle loneliness through a social group ‘Mumbai Seenagers’.

Queer psychologist and arts administrator Rakesh Ratti put together the first-ever anthology of South Asian gay and lesbian experiences. It was published as “Lotus of Another Colour” in 1993.

The ‘90s also saw the emergence of‘ women-loving-women’ in India. This was when activist and academic Gita Thadani set up Sakhi, a women’s helpline and lesbian resource center which facilitated cross-country networking between queer women.

India’s First Gay Film “BOMGaY”, a 12-minute long story starring Rahul Bose and author R. Raj Rao, among others, was made in 1996.

In 1997, when a lawyer and activist Arvind Narrain was still a student, he spearheaded the first LGBTQ rights seminar in the National Law School of Bangalore, opening up the discussion on queerness in a new and public setting for the first time.

Two separate helplines and support networks were set up for LGBTQ Indians in crisis – Sangini, based in New Delhi, for lesbian, bisexual and transgender women, and, Humraz for queer men.

A Delhi-based organization called CALERI (Campaign for Lesbian Rights) released a manifesto titled “Lesbian Emergence” which broke the silence around the lives of queer women.

In 1999, a discotheque named Soul Kitchen in Delhi hosted the first “gay night”, giving members of the community the chance to meet each other in a safe space where they can be themselves.

“Facing the Mirror: Lesbian Writing from India” published in 1999 became an important bit of literature that increased visibility for queer women in the country.

In 2001, Naz Foundation and The Lawyer’s Collective filed the first petition against Section 377, asking for it to be read down, on the grounds that it was discriminatory to queer people.

In 2001, going up against all odds, Mumbai-based trans activist Gauri Sawant adopted Gayatri, the orphaned daughter of a sex worker, and puts her through school and college.

In 2002, Kali became the first hijra person to stand for elections in Bihar. She was elected as ward councilor to the Patna Municipal Corporation.

Despite family pressure, Prince Manvendra Singh Gohil of Rajpipla came out of the closet in 2002 and became the first openly gay prince in India.

In 2003, the multi-organization group called Voices Against 377 was formed. They published the report “Rights for All: Ending Discrimination Under Section 377”.

Orinam was founded in Chennai in 2003 as a “support, cultural and activist space”. From organizing film festivals to reading groups to the city’s Pride march, Orinam has worked hard to boost queer visibility in the state.

By 2004, the LGBTQ community became increasingly organized and was ready to take the fight for equal rights out in public.

In 2004, 38-year-old Pushkin Chandra, the son of a retired IAS officer, along with his partner Kuldeep Singh, was murdered in cold blood. It brought members of the LGBTQ community together to fight it and It took 6 years for Chandra’s murderers to be given life sentences.

Back in 2006, India’s influential elite sent an open letter demanding that Section 377 be scrapped. Among these were people like author Arundhati Roy, Nobel laureate Amartya Sen, poet Vikram Seth, and journalist Rajdeep Sardesai.

In the absence of marriage equality, the Humsafar Trust’s Goa wing began organizing same-sex marriage ceremonies for people in the coastal state.

The first-ever Pride Marches in New Delhi and Mumbai were organized simultaneously in 2008. The two metropolitan cities saw a large and encouraging turnout, and it set the pace for the years to come, as Pride only grew bigger and brighter.

With efforts by the Naz Foundation in 2001, the Delhi High Court passes a landmark judgment on July 2, 2010, by reading down Section 377 of the IPC. In effect, it granted equal rights to those seen as ‘sexual minorities’, and was one of the most affirming moments for LGBTQ Indians.

In 2010, Ramchandra Siras, a professor of Marathi in Aligarh Muslim University, was suspended from his job then murdered, after the college authorities find him guilty of ‘gross misconduct’. Then after six persons suspected of murder were arrested.

The Kashish Mumbai Queer Film Festival – one of India’s largest LGBTQ film fests – was first launched in 2010, with the support of Bollywood actor Celina Jaitley.

It was also in 2010 that the Queer-Ink publishing house was launched by entrepreneur Shobhna S. Kumar which provides educational resources and crisis intervention services for LGBTQ Indians.

Even as the LGBTQ community reeled from the Supreme Court’s decision, Guwahati held its first Pride walk in 2013.

In February 2014, the Indian Psychiatric Society released a statement saying homosexuality is not a disease.

In April 2014, Health Minister Harsh Vardhan (BJP) made an unexpected comment about equality, saying: “Everybody, including gays, has human rights. It is the job of the government to protect their rights.”

Manabi Bandhyapadhyay became the first openly trans college principal in 2015. She held the post at Krishnanagar Women’s College for a year and a half until she decided to resign, citing mental pressure when, as she said, “All my colleagues went against me, as did some students.”

The same year 2015, Madhu Bai Kinnar made history too, after being elected as the first trans mayor of Raigarh.

In July 2017, trans activist Joyita Mondal was appointed to the bench of the National Lok Adalat (an alternate legal redressal mechanism) in the Uttar Dinajpur district of West Bengal.

‘Queen of Dhwayah’ was inaugurated as the first beauty pageant for trans women in Kerala.

I am not afraid to admit I am a lesbian. A PROUD Lesbian.